Augmented reality briefly punctured the public’s consciousness in 2016, but since then the tech has largely remained on the periphery. Daniel Davies hears from Google’s AR expert Amit Singh on the plan to get people using AR daily

In July 2016 a strange phenomenon began. People started walking the streets with their phones held in front of their faces, only to stop and suddenly start flicking a finger at the screen. There was nothing wrong with these people, and they hadn’t lost their minds. It was just that Pokemon Go had taken over the world.

Although, the game is still at number 6 on the top grossing games on the Google Play store and is number 16 on iTunes’ list of top grossing apps, Pokemon Go’s popularity was fleeting. For most us memories of playing the game have faded, but what we do remember is that for one summer at least the world was enthralled by augmented reality.

Now, Google wants us to feel that way about AR again.

Amit Singh is Goggle’s vice president of business operations for virtual and augmented reality. When he came into the position in May 2016 he was described by Business Insider UK as “an operations guy, someone who takes early-stage stuff and turns them into real businesses, with business models, sales support, and what have you”.

That sounds impressive, but it’s not hyperbole or a line cut and paste from a biased Google press release, it’s an accurate description of Singh’s work. Since taking up his role as Google’s VR guru, Singh has been at the forefront of bringing virtual reality to consumers, creators and educators, with the release of Google’s VR platform, Daydream, its VR camera rig, Jump, and its VR and AR teaching tool, Expeditions.

Google began its journey into VR with Google Cardboard, which transported people into other worlds by combining cardboard, a magnet, a rubber band and some magnifying glasses. Singh admits that it was from these humble roots that Google “recognised the power of immersion”.

The world is ready for a Google Maps, AR mashup

Google’s previous foray into consumer AR was with Google Glass, which was a product that promised a lot but delivered little. This time around Google plans to use the technology to add value to people’s lives, and instead of dorky glasses that get you called a ‘glasshole’, Google plans to deliver AR via its Android ecosystem. By doing this, the company hopes that it will be able to keep people’s attention focused on AR in a way that neither Google Glass or, for the majority of us, a game like Pokémon Go were capable of.

Singh explains how AR could be used to help people with allergies, who at present have to fastidiously search through supermarket isles to find products free of things like nuts or dairy. Using AR, supermarket shelves could come to life, and products that are safe to consume could make themselves known to shoppers rather than customers having to search them out.

Another use for AR has already been put in place by Google, thanks to its partnership with the home improvement retailer, Lowe’s.

“Lowe's is a big box retailer in the US, where you can buy hammers and nails and stuff to fix your home, but it's a very large format store and when you go to these stores it's tough to find help,” says Singh.

“There's not a lot of people available and the signage is not always perfect, so we've embedded AR into Lowe's app, so you just plug in with your phone and then augmented directions appear that walk you over to the precise location of the product in the aisle or in the bin that the product is located. So if you need a circular saw or whatever you just take your phone out and it will show you augmented footsteps, and it will point you to exactly where you need to go.”

In the long run, using AR to provide directions won’t be confined to one US based retailer, and Singh talks of using this kind of technology to empower people to find their way in unfamiliar locations.

“[Imagine] you come out of a subway, you're in Lisbon, but you're from a different part of the world, and you're trying to figure out which way to go. It would be super useful to just position your phone and [know] this is the direction because you're augmenting the real world with these virtual directions.”

Google wants you hooked on AR

Back in 2016 when you couldn’t open social media without seeing a Pokemon Go story or gif, the main criticism Go received was that it somehow made seemingly sensible people take leave of the senses while playing it. People fell of cliffs and got stuck up trees while searching for Pokemon on the game, so it will be interesting – or terrifying depending on your perspective – to see if people can navigate through traffic and busy streets without encountering the same problems.

Despite the potential for carnage, there is a reason Google wants you to start using AR every day; it realises that this is the quickest route to monetising the technology. “We're helping developers...build the experiences across commerce and shopping and so on so that it becomes a daily habit,” says Singh. “Once it does I suspect the natural evolution of monetisation comes through with these things.”

To help bring AR to the attention of Google’s hundreds of millions of Android users, the company has launched a platform for building augmented reality apps, ARCore. Helping developers create content and letting them share it on the largest and most visible AR platform in the world, demonstrates Google subscribing to the view that more content equals more opportunities for advertising and commerce.

“You can have games that are purchased by people on a model that people know,” says Singh. “If you can help people find things or shop for things there's appropriate business models around that, around advertising and commerce, so we think because of its scale it's going to be something that developers will build for and people will use on a daily basis.”

Google’s ambition is to monetise AR, and bringing in a man like Singh who has a history of turning early-stage technologies into real businesses is proof of that. At the same time, though, Google does still see AR as a technology that can change the way people see the world.

In education, Google Expeditions has the power to bring textbooks to life and provide schoolchildren with more engaging and immersive experiences. Obviously, this is also a way of getting users – or potential users – hooked on AR at a younger age, but that doesn’t stop the project and platform from, as Singh explains, changing the way children learn, as well as broadening perspectives.

“We've seen really interesting use cases where once kids interact with augmented objects their recall and the way they learn, the way they store information is very, very different,” says Singh.

“Across different disciplines, everything from directions to entertainment to shopping and running, augmented reality can have a really big impact”

“Google Expeditions is this platform for teachers where they can take kids on a virtual or augmented field trip. You hand these kids a phone and they can either put it in a cardboard headset and it'll take you to the Great Wall of China or you can scan round a volcano it'll actually show it erupt. I was showing this to my kids and I was like wow, this changes how they interact with learning.”

From retail, to navigation and education, Google has big plans for augmented reality, and tahnks to the power and ubiquity of Android you can expect to see people wandering the streets in their droves with a phone held up in front of the face again very soon.

“We feel like across different disciplines, everything from directions to entertainment to shopping and running, augmented reality can have a really big impact,” adds Singh. 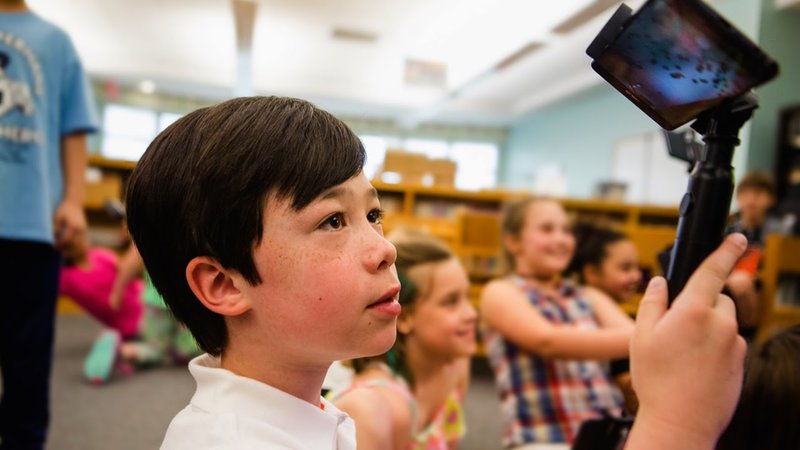