How Enterprise VR is Taking Location Out of Training 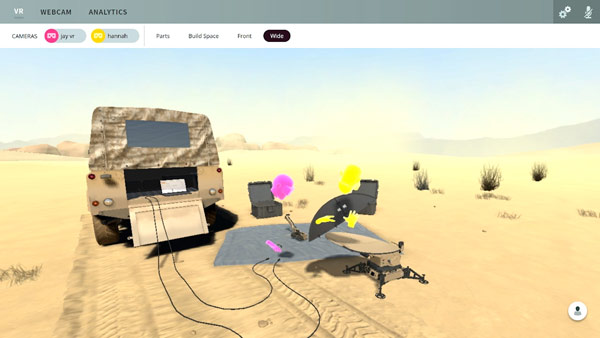 From collaborative projects to training, travel has long been a vital part of international business. But with the advent of virtual reality, you don't need to catch a plane to be in the same room as your colleagues. Lucy Ingham speaks to Jay Johnston, CTO of Immerse, the company behind the world’s first enterprise-ready, multi-user VR platform, to hear about the business potential of the technology

It's the end of August, and I'm standing in the middle of a desert, learning to assemble a satellite transceiver.

In front of me is the ghostly representation of Jay Johnston, CTO of enterprise virtual reality (VR) company Immerse, and through the headphones I am wearing, I can hear his voice guiding me through the process. Over the course of around 20 minutes, he talks me through every step, taking me from an absolute novice to someone who, if pressed, could probably put another one together with relative efficiency.

In reality, Johnston is only a few meters from me, standing just around the corner in Immerse's London office. This training session however, would have worked just as well no matter where he or I were: I could have been on the other side of the world, and the view in front of me, along with the guidance he provided, would have been exactly the same. And if other people had wanted to join in with the training session too, they could have done so from anywhere, either by donning their own headset or watching in their browser.

This is the promise of virtual reality, and thanks to companies such as Immerse, it’s available to businesses now.

"What we aim to do is democratise VR for enterprise," says Johnston. "We've created a platform and a bunch of tools that aim to enable companies large and small to really make use of this incredible new format.

"And it's really all about giving them control by providing some tools — an SDK — and a collaboration platform so that they can create their own experiences, upload them to our platform with a single link, invite others to join them in that virtual space and interact with whatever content they have created, be they industrial applications like high-fidelity models — engines, turbines, medical devices — or a learning experience where you can assemble a sophisticated piece of equipment like a satellite transceiver."

While there are a host of reasons why businesses might benefit from Immerse's tools, the global multiplayer aspect is undoubtedly one of the best, particularly for businesses with multiple international offices or offsite operations.

And while some tools, such as video calls, already exist to reduce the amount of travelling required, Immerse's VR platform brings this to a whole new level, even if not everyone involved has access to a virtual reality headset.

"We want to give people that are browser users the ability to interact with people who are also in VR," explains Johnston. "So you get some pretty interesting scenes where there'll be three people in VR that can be anywhere in the world — maybe they'll be dismantling a piece of equipment — and you can have other observers who can see exactly the same thing, change camera positions, talk to the people in VR, even send them content, be it pictures or videos, those kind of things.

"Really the flow is to create, to collaborate, and then to track: we can actually present reporting on what happens in those scenes and build a picture that we think is going to be very interesting to enterprise users."

Among the companies that have already seen the benefit of this is pharmaceutical giant GlaxoSmithKline (GSK), which has been using Immerse's technology for training.

"GSK very quickly realised the value of having that kind of capability," he says. "You add the multiplayer element to it and it means that people can join from anywhere in the world, they can watch what you're doing, or they can interact.

“People can join from anywhere in the world, they can watch what you're doing, or they can interact​​​​​​​.”

"We built a submarine console for the planesman — that's the person that controls the elevation of the submarine, or the depth, as it were," explains Johnston.

"We met with them to understand how we should model the interface and what the interactions needed to be, and implemented that on a VR scene that then sat on our platform, and what was brilliant about that was for the technology to do the acceptance testing, they brought in some actual submariners, people that drive submarines for a living, and within the space of about 8 minutes they were able to verify that it all worked as it should.

"We were logged in from here in London, and they were at their offices, and it was an amazing experience where they had a run through according to the checklist, and having decided that it worked as expected, they then started to experiment, shall we say, have a bit of fun, try to see if they could drive the sub as it were.

"I think that really suggests the power of this learning paradigm. Those are people who can be brought together who are geographically distant, they can interact and collaborate with some pretty sophisticated or complicated interfaces, and they can actually verify the right sequence, the right order that things should be done, and have a bit of fun."

One of the notable aspects to VR as an emerging enterprise platform is its potential for so many different industries, and Immerse's platform is no different.

"I think it's amazing the number of industries that have an application," says Johnston. "Our approach of providing the tools means that really any industry that creates or interacts with 3D models or environments can apply these tools.

For some industries, the platform also provides benefits from a health and safety point of view, providing realistic training without danger of injury. Oil and gas, says Johnston, is one example of this.

There's also the cost savings of training in VR, such as in the case of GSK, which commissioned Immerse to develop a training solution for the repair of a multi-million pound pill press machine. Normally, the company would have to purchase an additional machine for trainees, which they can then experiment with.

"You have that to take apart and to reassemble to ultimately break several times in the process," explains Johnston. "Obviously with a 3D model you can do that as many times as you want, you just hit the re-set button and it's back to where it was."

An important part of Immerse's approach has been to make sure that businesses can easily publish into VR, allowing both large and small companies to, as Johnston puts it, "take advantage of what we think is a real revolution in experiential training".

"The learning applications are pretty well established, but our aim is to make that incredibly easy for enterprise, so we're using standard tools, standard networking ports, so it just works," he says.

As part of this, the company has developed an exhaustive software development kit (SDK) that takes much of the faff out of developing in VR.

"The SDK aims to take all of the pain out of finessing the interactions or figuring out how to make something work in a multiplayer environment, so we're just trying to continually lower the barrier to entry so that any company, large or small, can make use of VR as a platform," he adds.

"Right now we use the Unity game engine, which we think right now is the most widespread VR authoring tool. [Developers] can craft an experience in Unity and then with this simple click of the VR export button they can create the assets that they then upload.

"Once they're uploaded then it's as simple as making a space, getting a link back, and you can send that link to anybody who has, basically, internet access. If they don't have a VR headset — an HTC Vive is where we're starting — they can join the same space in a browser."

“The learning applications are pretty well established, but our aim is to make that incredibly easy for enterprise.”

This approach not only makes the platform accessible to businesses, but also allows projects to be imported into VR at a far earlier stage, allowing the tool to be used not just in training, but also in the design process. And one industry that could particularly benefit from this is automotive manufacturing.

"In manufacturing you've got whole teams that are working on 3D design, maybe prototyping a new car, a new engine, and they want to show that to somebody elsewhere in the company, that could be remote," he says.

"It can take them days to package up that file, send it across and have any meaningful discussion about it. Our aim is to enable one-click publish to VR, and we think that that's going to be immensely valuable, that people who are working on things at an early stage can enter a space from wherever in the world and they can interact with these objects in minutes."

The future for enterprise virtual reality

While many companies are still getting to grips with the concept of VR, it's clear that many are already getting onboard with the technology.

"A lot of companies have realised the value in investing in innovation, so GSK has an innovation team, they're given budget and resources to really experiment, to try and create a competitive advantage by making use of these new technologies," says Johnston.

"Considering the fact [that] the high-end headsets, the Vive and the Rift, have really only been in the market for 18 months, it's amazing what the uptake is that we're seeing. The price point is coming down and companies are figuring out where it fits in their portfolio of technologies. So I would say we're seeing a real rapid increase in not just interest but also application of VR in enterprise."

“I think it will become incredibly pervasive, I think it will reach all corners of enterprise much in the same way that the internet did 20 years ago.”

However, with the technology very much in its infancy, what does the future hold for enterprise VR?

"I think we're all going to be surprised in terms of the ways it’s used in the future," muses Johnston.

"I think it will become incredibly pervasive, I think it will reach all corners of enterprise much in the same way that the internet did 20 years ago. We'll use it for communication, we'll use it for role play, for learning, for prototyping, for the design process, simulation, anything that requires modelling application I think is ripe for VR.

"But our strategy is to really try and create the tools that mean people can be as creative as they want to be in using VR, and we fully expect that they're going to surprise us in terms of the ways that they use it."